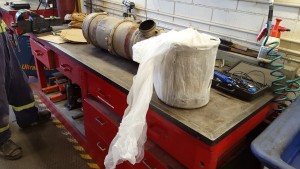 Note: In this video I said the turbo boost sensor has to be replaced. Now we are cleaning them up with Kleenflo spray or Mr. Clean which works great when you soak the part over night keeping away from the electrical connections. A new sensor costs around 60 dollars so removing soot recycles a perfectly good sensor and we save few bucks.

The problem with emissions is they are very hard to clean up. The byproducts of combustion is sticky and ugly beyond description. Man and technology took on a huge challenge trying to convert soot to ash and kick that out of the exhaust tail pipe with close to zero pollution as dictated by the EPA. Even though diesel engines produce 28 times less carbon monoxide than gas engines they have a high level of nitrogen oxide which produces soot.

The diesel particulate filter is supposed to capture the soot and once regeneration has been completed the soot turns to ash reducing the harmful levels of nitrogen oxide then pushed out into the atmosphere. A forced regen is done using the engine diagnostic software. We use Insite Lite for Cummins engines, ServiceMaxx Pro for Navistar engines and DDDL for Mercedes engines.

Without these diagnostic tools operators would have to rely on the onboard engine computer to look after keeping the soot levels down during regular operation. That would be a disaster since most times these passive regens do not keep up because of the different driving habits and routes that highway vehicles do. Our wheel chair buses just run around town in the suburbs picking up students and never see much of the highway which doesn’t help with keeping engine temperatures up.

The diesel engine onboard computer has been programmed to monitor everything imaginable that would effect operation, performance and emissions so if any reading from sensors placed strategically around the engine goes astray the dash warning light will come on and alert the driver that there is a concern. I think this is a great system and it protects the engine from obvious mishaps like low engine oil pressure, high coolant temperatures, water in the fuel and a long list of other monitoring that’s going on as soon as the ignition key is turned on.

Emissions however is a forever re-occurring problem especially with a diesel engine that does not clear up the soot build up properly. Troubleshooting this problem involves finding the code and zeroing in on that area. If there is a blockage in the diesel particulate filter the first step to try is a parked regeneration to cook out the build up of soot in the filter cartridge and hope that will eliminate the engine code.

We had to take it a step further and go on a road test with the lap top to see when the code appeared and which specific code it was. This case was an ongoing one because the engine codes did not want to go away. The pressure differential in the DPF cartridge was up to 5 psi when the engine was hot and the bus was climbing a grade which means a maximum flow of exhaust is required.

If there is a restriction in the DPF the computer flags that situation and turns on the engine code amber light on the dash. If the code is emission related the MIL amber light will illuminate. The amber engine icon indicates an engine related code which might be a fuel pressure problem or something similar. Both lights may turn on together as well but it all boils down to hooking up the laptop and seeing exactly when the code happened, how many times it occurred and going into the troubleshooting section and getting as much information as possible to nail down the cause.

The biggest tip in all this emission stuff is to keep the engine hot and under load to sustain the exhaust temperature and keep the black tar of death out of the engine intake and exhaust systems so they can operate properly. Like our shop you’ll have a system of steps to take with every diesel you encounter. It’s all about checking sensors, the DPF cartridge…. cleaning them up and making sure there are no intake / charge air or exhaust restrictions or leaks.