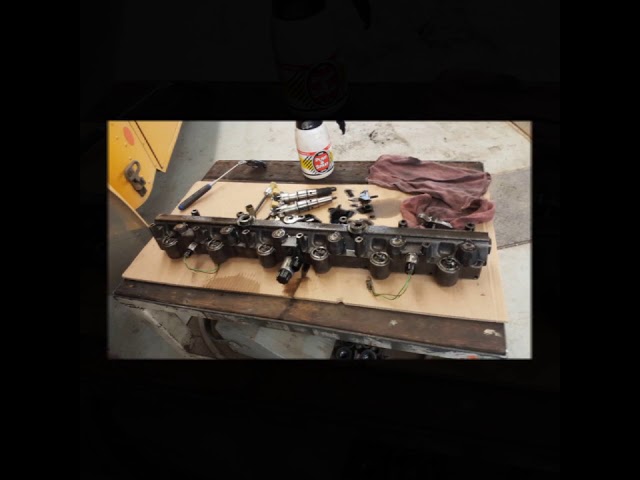 School bus repairs is never boring because the variety never ends. I will go through each of the featured jobs in this video and do an over view including the solution which is the best part of any mechanical repair. The first part is an injector failure or I should say injector sealing washer failure allowing compression into the fuel supply.

This caused an extremely rough running diesel. Air in the fuel system sounds like a miss with RPMs rising and falling constantly along with no power. There was no engine codes and all of the injection control and fuel supply pressures were normal. This engine had just finished getting a rebuild so compression / blowby was not an issue unlike several other Maxxforce engines we are running.

The injectors were getting activated correctly according to the ServiceMaxx software and an engine code would have popped up if they were not performing. We learned that the actual fuel injection pressures into each cylinder is not easy to analyze and with no codes we decided to remove all of the injectors. This proved to be a good move. In the video you can see the black sooted up injector. The sealing washer which seals compression away from the injector body failed and allowed compression 400 psi to enter and circulate around the injector and get in to the fuel supply and cause the running problem.

We replaced all of the injector seals with OEM instead of aftermarket seals and applied loctite to the injector hold downs to prevent them from loosening off. In the future we will only use original manufacturer parts for sealing injectors. This is something that experience will help us prevent a re-occurrence.

The next problem was a crank but no run on a Thomas pusher rear engine school bus. The bus would shut down without warning. This obviously is an issue we had to fix before releasing this bus back in to service. Eventually the bus would not run at all which is a good thing knowing that when we find a failure and the engine runs again we can be confident that the right repair was made.

We found a corroded wire that connects to 4 smaller wires running to the 21 pin connector to the engine control module. It is located above the 120 pin connector at the motor control module bolted to the right side of the block. The main battery feed goes to this connector from the VEC (vehicle electrical center) module which is located above the engine where the ignition and start switch is located. It took a lot of effort to get to these wires which were buried in the main harness at the rear against the firewall. The bus started up and is still running after 3 days of operation.

Next is a Cummins ISB with an actuator code. The actuator is an electric motor on the VGT (variable geometry turbo) that moves the turbo vanes during operation for exhaust brake and regen purposes. The actuator costs $1200 while the turbo runs around $2900 so the decision was made to replace the complete assembly. The reason for a complete replacement is this turbo is the original 2009 unit and most likely the actuator failed because the internal parts of the turbo was starting to hang up…a common problem.

The differential replacement was due to the locking actuator fork breaking in half. This shift fork moves when the driver activates the switch in the cab that locks the differential to avoid spin out for better traction. Somehow there was a bad shift or possibly the operator was on ice and over spun the differential to the point of failure.

Following this job we are load testing batteries…a common practice when a problem is suspected. We load them up and check the voltage drop. A very simple check that tells the mechanic to either recharge the batteries or replace them. The tester device here is an old analog unit that I cut my teeth on when I started out and still prefer because it’s a physical load using a carbon pile while viewing a voltage gauge. The new digital testing tools are a digital screen that says good battery or bad battery.

Next we have a heating problem on a Thomas pusher bus. The front panel opens up where all of the heater cores and blower motors are located. The heat control is an electric motor that opens and closes according to a dial the driver operates in the cab. These controllers fail once in a while unlike the old fashioned cable operation that older buses came with from the factory. New technology sometimes causes more problems. In this case the wiring to the heat controller was faulty.

That shiny object in the exhaust system is a DPF (diesel particulate filter) that runs around $2300….jobber price. These are for International diesel engines and unfortunately they do not last forever. The DPF consumes a lot of soot and ash and is over run most of the time. Eventually they break down and fail with chunks of filter material breaking off internally.

Next is a DT MaxxForce diesel engine getting a test for injector control pressure. The software told us the pressure was only 10 psi well under the average 800 psi to run the injection system. After testing the high pressure oil pump with a gauge it was determined the pump was not producing any pressure. $1700 got us a new pump and voila this diesel was back in business.

Finally a Mercedes diesel engine gets a new water pump that was leaking out of the main shaft seal. This is quite a common failure which has to be attended to quickly because of the coolant working it way into the bearing housing which could possibly cause a bearing failure due to lack of lubrication. The worst case scenario is the fan driving into the radiator which is something we definitely do not want to happen.

He thought all we did was oil changes? I had to bite my tongue thinking how in the world would we get by without doing all of our own work? Contracting out all of our repairs to a 150 dollar an hour truck shop would kill our operating budget in no time. Our shop has to save money and prevent big break downs period. That’s a challenge we’re willing to take on.